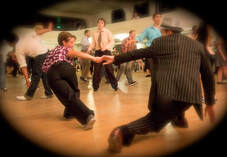 Kevin Buster has been dancing for 24 years. He has taught dancing in Europe, Africa, Canada and the United States.

He studied at Herrang Dance Camp in Sweden from 2002-2007 and learned from original master swing dancers Frank Manning, Norma Miller, Sugar Sullivan and Dawn Hampton, and from Lennart Westerlund (leader of the Rhythm Hotshots and Harlem Hotshots).